Beauty and the Blacksmith
Tessa Dare So much potential. So much fail.

I'm honestly surprised this has so many 4 and 5 star reviews. Although most of them seem to have received this book for free through good reads or directly from the author.

The story telling is disjointed. Jumping scene's. The female characters are just awful. Every single one of them is riddled with insecurities but not in any compelling way.

The story telling was frequently immature. From a love scene referring to a breast as a boob, to a scene where the men get drunk and light their farts on fire, to a villain calling someone a fudge packer, who talks like this?

I can not decide if this was written by someone who fancies themselves an armchair psychologist or a frat boy. Either way I will not be reading anymore from this author.
Tweet This is nothing but New Species fanfic, and not very good fanfic at that. It is such a blatant rip off, and considering how litigious EC is, I'm surprised this author hasn't been sued.
Tweet I've struggled to finish this story off and on for what feels like years. Very let down, as this writing team is capable of much better work then this.

The first few chapters are great but the book really starts to lose steam shortly before the half way point. This is where I have always given up on the book and it feels maybe the writers did too. The two main characters, well pretty much all of the "good guys", just seem to turn into a couple of useless twits and the poor decision making begins. The ending is anticlimactic and just plain boring. I kinda wanted the villain to win since he was the only character even remotely interesting. This is a 2 star on the Eve Langlais scale. I couldn't put my finger on any specifics on what was wrong with it, but it just didn't grab me. I ended up having to skim through as I just couldn't be bothered to care about either of the characters. Shame really as I love me some bear shifters.
Tweet
SPOILER ALERT! So much potential wasted. It was hard slogging through book. Extremely slow build up and world building. The romance was unbelievable and anticlimactic. The final battle was quick and a bit of a let down.
Tweet

No One Else Can Have You WARNING!
If you don't like this book the author may stalk you and show up at your house. 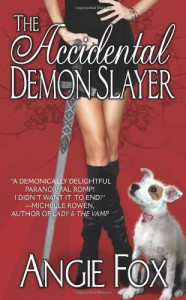 Until the Sun Falls from the Sky Terrible. The absolute worst. Can I get a refund please?

I couldn't get more than 15% into it before I wanted smack the h so hard her mama would feel it. She is supposed to be in her 40's but acts like a spoiled preteen who was told she cant go to the Bieber concert. I. Hate. That. Shit. Why do authors do that? Never again will i give this author my hard earned money.
Tweet Touch of the Demon Best one so far. Over all this series is avg at best. It's a suitable filler as you wait for new books from the better UF authors but totally skippable.
Tweet I don't get why this book has such glowing reviews. The writing was poor. Dialog between characters was stilted. While she did spring for an editor, per the credit at the end, it was poorly edited. Character names were switched at various points which should have been an easy catch. The romance was flat and the love scenes didn't have enough heat to make up for any of it. Not even worth a free read much less $5. Save your money and skip this author entirely.
Tweet Not my fav this was just ok. Never connected with either character and the ending just kinda fizzled out. I expected better and hope this isn't indicative of how the rest of the series will progress.
Tweet Meandering. Very slow start seemed to drag on. Female lead was sugary sweet and child like despite having suffered horrific abuse. I can't stand that crap. Male lead was supposed to be a badass alpha demon but came off more as a pity party for one except for random fits of anger when the author must have realized he was starting to sound like a chick so must insert some rage. I didn't bother to finish.
Tweet Not feeling this series so I'm taking a pass on any subsequent books. I like my Eve Langlais funny and these just aren't. They are darker and far more serious. If that's what your in the mood for you may enjoy it but she does the quirky humor far better.
Tweet Weak entry in this series. I'm not big on ménage relationship story lines but when they are done right they are HOT! HOT! HOT! This one was just lukewarm. I expected better.
Tweet
next »